Today was something really awesome.

My Step-Dad and I took the boat out on the bay today. The weather was perfect for it, the water was incredibly still, and there was no hint of wind, the cloud coverage was, as is so common in Cold Bay – awful, but there were hints of sunshine!

It’s been a long time since I last went out on a motor-powered boat, and that was driven by someone who had years of experience manoeuvring boats like this one. The last time I was on a boat, of course was in San Francisco when I crossed the bay to Alcatraz.

To say I was feeling apprehensive is an understatement. There were so many different noises that I was trying to determine the function of, and although I wasn’t scared, I was alert.

It didn’t take long to get up on my feet after we saw this.

Slowly, but surely – we got much, much closer, and I found a sudden courage and faith in our not-so-little vessel. Perched on the very front of the boat I did my best to stay steady despite how exciting it was to be so close to this whale.

Of course, then it was just a matter of taking as many pictures of them as possible! 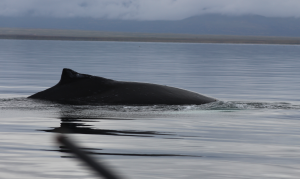 Just as we were leaving, after about 30 minutes following this one whale, I reckon it wanted to say goodbye. =D

I came away with over 100 photos, and an experience I don’t think I’ll be forgetting any time soon! Exciting times!